Part 3: The Beginning of All That

However, their biggest stunt was yet to come.

"We dug our own graves on Dover's Hill," Ben says.

While a marching band distracted the crowd, Ben and Joe, wearing neckerchiefs and old-fashioned shepherd's smocks, slipped into their shallow graves covered by coffin boards and turf.

After the band finished, two men disguised as poachers came walking up the hill carrying a jug of cider.

"I got a rabbit down 'ere!" one of them shouted and started digging frantically.

To the crowd's surprise, the poachers soon discovered the graves and lifted the shin kickers onto the ground.

"They lay us down, give us a drink of cider, and we started shin kickin'." 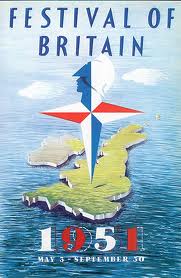 The BBC was on hand to record the event in a black-and-white newsreel that opens with pastoral music and scenic shots of Campden and its Olimpicks.

"Among the villages of the Cotswolds was found renewed proof last week that the Festival is Britain's," intones a tea-and-crumpets voice. "At Chipping Campden, it was marked by seven days of celebrations, including a revival of the Cotswold Games."

Cut to Ben and Joe locked in combat, swiping at each other's legs. When one of them swings, the other jumps back.

"A favourite item then was always a shin-kicking contest, brought to life again this day by two local young men. They have volunteered to resurrect this duel and show how shins were broken years ago."

Ben and Joe kicked and feinted until they got tired, having decided beforehand who would lose.

"I lost the toss," Ben says. "It was really good, I thought. And that was the beginning of all that."

Like what you've read?
You can buy True Brits here.
Posted by Unknown at 13:32