Part 10: First Blood and the Infirmities of Our People

Straddling both the Wold and the Vale, Dover's Hill provided neutral territory for bloody prizefights, and for over two centuries, the main attractions at Britain's homegrown Olimpicks were also the bloodiest.

In theory, backswording, or cudgel "play", was less brutal than shin kicking (which was known simply as wrestling throughout much of the West Country).

Opponents whacked each other with sticks until one wound up with a "broken head," verified by a trickle of blood at least an inch long on the scalp (an extension of the "first blood" rule in duelling). 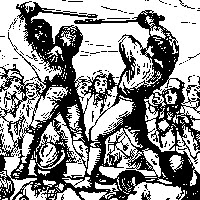 A deft gamester could graze a scalp with surgical precision. But in practice, both backswording and shin kicking frequently degenerated into bloody spectacles, with participants often maiming—and occasionally even killing—each other.

Incredibly, some hard nuts competed in both sports on the same day.

Not surprisingly, many women disapproved of the sports. Accounts from the 1700s and 1800s (written by men, naturally) depict wives and girlfriends trying to stop their lovers from joining the fun.

Apart from the possibility that women are indeed smarter than men, shrieking Blood! Blood! with the crowd wasn't very ladylike.

What's more, women had to cope with the consequences of such wilful stupidity, nursing the broken heads and bloodied shins.

For their part, the men fought for love rather than money. Not the love of their womenfolk, you understand; simply because they loved to fight.

Of course, there were prizes to be won—a gold ring, laced hat or half a dozen belts or gloves—but neither shin kicking nor backswording would make you rich.

A typical country backsword contest in 1778 promised "Half a Guinea… to each Man breaking a Head, and Half a Crown to each Man having his Head broken."

In modern money, that's barely £80 for bashers and £20 for bashees.

The first graphic account of shin kicking and backswording on Dover's Hill comes from William Somerville, a local justice of the peace who emulated Hogarth.

While the famous painter satirised the excesses of Gin Lane London, the country squire targeted "the luxury, the pride, the wantonness, and quarrelsome temper of the middling sort of people" responsible for the poverty and "bare-faced knavery" in the world (though tragically, he didn't end up much better than his subjects, dying a penniless alcoholic).

For Somerville, Dover's Games were proof that England was going to pot.

"A country-wake is too sad an image of the infirmities of our own people," he wrote in the introduction to his satiric poem, Hobbinol, in 1740. "We see nothing but broken heads, bottles flying about, tables overturned, outrageous drunkenness, and eternal squabble."
Posted by Unknown at 01:30