Part 21: We Were Some Ignorant Little B's

"They took it serious, y'see. Tough as hell—all of 'em were, in those days," an Old Campdonian tells me.

Shin kicking had all but disappeared by the time Fred Coldicott was born in 1910, but he remembers playing just for fun as a boy: one of the kids in his gang, Wilfred "Guthram" Plested, was the nephew of the backswords champ who lost an eye and killed a man in the fatal bout held during the last years of Dover's Games.

In their flat caps, pullovers, long shorts and socks, the kids would play games like leapfrog, noughts and crosses (tic-tac-toe)… and shin kicking.

"Very often, you'd get one who'd cry—the weak-hearted ones. I don't think I ever come under that category," laughs Fred, whose nickname was Tiger. 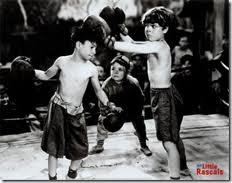 "We were some ignorant little b's in those days. We were little brutes. It was nothing to have a good stand-up fight. You never see that nowadays, do ya? You'd run home with a bloody nose to your father, and he'd say, 'Serves ya damn right, go back and give 'im another go, and give 'im a nose bleed!' I got no sympathy from dad. It was a funny old world."

Outsiders came away with much the same impression.

"There is no imbecility nor barbarity that human beings will not practise and even exalt, so long as it be sanctified by custom," Massingham wrote of shin kicking on Dover's Hill.

"Only a traditionalist or a good old Englander could regret the blessed silence and solitude that have come in the wake of the turbulent ways of men."