In the spirit of revival, the organisers decided to resurrect the sadistic sport, if only for show.

Ben was roped in when his best friend, Joe Chamberlain, volunteered. "I didn't mind, I thought it was a bit of fun," he chuckles. "We were young and silly."

Both married and in their thirties, Ben and Joe could have been siblings, what with their hooded eyes and jutting jaws.

In a photo from the time, they're standing side by side laughing, brothers in arms, one in a pinstriped jacket and paisley tie, the other in a flat cap and overalls.

Although Joe worked in town at the chemist's and Ben was a farmer, they lived next door to each other in Campden; the couples would nip into each other's houses for tea and conversation—"very sociable, like".

And shin kicking—even the pretend kind—was best done among friends.

One over-enthusiastic swing would be enough to infuriate anyone and turn a good-natured display into a grudge match. Ben and Joe tried to check their blows, kicking hard enough to make it look realistic but pulling back just before impact. They also had padding sewn inside their trousers.

"Not real padding," Ben says. "It was just a double thickness on our trousers."

"They Call It Sport, But We Say It's Plain Crazy!" a newspaper exclaimed, with a photo of Ben kicking wildly at Joe's bare shins (but missing by a country mile).

Shin kickers of yore supposedly prepared by deadening their legs with hammers. So Ben pretended to do the same for reporters:

"Tom Barnes, a 79-year-old local blacksmith, skilfully swung his seven-pound hammer to fall with a thump on the shinbone of 34-year-old farmer Ben Hopkins. And Ben, he winced a little, then—'A little harder if you please, Tom,'—he said. 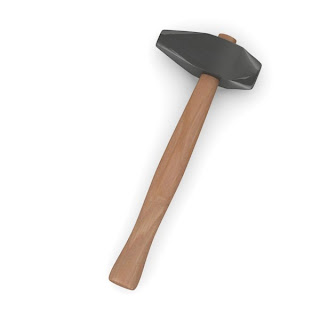 Like what you've read?
You can buy True Brits here.
Posted by Unknown at 13:31