Dover returned to England a very rich man, and Selkirk also did well for himself.

According to one story, Dover took Selkirk to a tavern in Bristol and introduced him to a 60-year-old journalist by the name of Daniel Defoe.

The penniless hack crafted Selkirk's story into his first novel, The Life and Adventures of Robinson Crusoe.


(Defoe also tried to cash in with two sequels, The Farther Adventures of… and The Serious Reflections of Robinson Crusoe; for his part, the real Robinson Crusoe tired of the high life, returned to the high seas, and died off Africa, probably of yellow fever.)

Ironically, the buccaneering doctor lost much of the money he stole in South America by gambling it in the subsequent South Sea Bubble. (Defoe also lost his shirt in the stock market debacle.)

However, Dover made up his losses by penning a bestseller of his own, a controversial do-it-yourself guide called The Ancient Physician's Legacy to His Country.

In the book, which ran to eight editions plus a French translation, the old buccaneer defended his use of mercury and gave readers the recipe for his famous Dover's Powders, a gout remedy that was still used as a painkiller in Europe well into the 20th century. 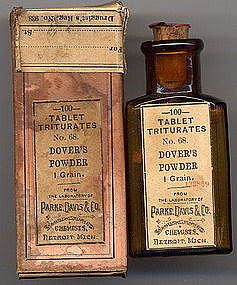 "In two or three hours, at farthest, the patient will be perfectly free from pain," the "Ancient Physician" promised.

Which isn't that surprising, considering the key ingredient was large doses of opium.

Men of the world like Dover and Defoe would have been familiar with "The Campden Wonder," a real-life tale of kidnap, murder and witchcraft that captivated their contemporaries and still fascinates true-crime buffs.

The mystery centres on William Harrison, a trusted servant of Sir Baptist Hicks' family ever since the tycoon took over as Campden's lord around 1610.

The family mansion had been destroyed during the Civil War, so Sir Baptist's daughter and heir, Lady Juliana Noel, had the stables converted into a comfortable home called Court House (still inhabited by her descendants).

Harrison lived nearby, possibly in one of the mansion's old banqueting houses, known as the recently-restored east pavilion.

Like what you've read?
You can buy True Brits here.
Posted by Unknown at 18:28