Even so, shin kicking lived on in gory incarnations throughout the West Country and the rest of the country—as well as America.

Hobnailed boots and metal toecaps weren't enough for some fighting Welshmen; they wore thick shoes with nails sticking out the sides.

Shin kicking was so popular it made it into one of the first Welsh dictionaries in 1793 as 'crimmogiaw' ('crimog' meaning 'shin').

Eventually, though, the Welsh adopted the incongruously gentle term used by their coalmining counterparts in the northwest of England: "purring" (possibly related to "pare" in English or the Scots Gaelic piorr, meaning "to scrape or stab").

In Lancashire, the locals enjoyed clog dancing—a forerunner of American tap-dancing—as well as clog fighting. Only they didn't use the quaint, carved klompen worn by the Dutch; their shoes and boots had horseshoe-like irons hammered to their wooden soles to make them hardwearing.

The leather uppers were fastened with brass nails, and metal toecaps were often added for dancing and fighting. 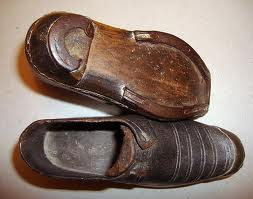 So "clog toe pie" wasn't a regional delicacy, and "a leather 'n' timber kiss" wasn't a sign of affection; they both meant that you were about to receive a good kicking.

What's more, miners would grapple against each other stark naked, wearing only their clunky, metal-trimmed clogs.

This may have been in imitation of the Greeks, or it simply may have seemed like a good idea at the time.

Miners from Oldham, Bacup and Ashton would pit themselves against quarrymen from Whitworth.

The Oldham "rough heads" were renowned for being as slippery as "snigs," or eels, but their winning streak ended after they were caught cheating by rubbing soap all over their bodies.

Another report tells of a clog fight near Manchester in 1843 between two young men named Ashworth and Clegg—"(both in a state of nudity with the exception of each having on a pair of strong boots)".

They kicked each other for 45 minutes… all for one pound. Both wound up severely injured.

In another fight, Ashworth went on to kill another opponent and emigrate Down Under (aptly enough)—though it's unclear whether this was his choice or Her Majesty's Pleasure.
©J.R. Daeschner