Rather than Australia, he might have been more at home in America.

The most gruesome account of shin kicking comes from the US, where Welsh coalminers introduced "purring" to Pennsylvania.

The New York Sunday Mercury described a "purr" outside Philadelphia between two fighters known as Grabby and McTevish in 1883.

(And if you're at all squeamish, I suggest you look away now…):

"At two o'clock the men appeared, wearing Lancashire shoes toed with copper, having submitted their feet for inspection to show that there were no protruding nails. Grabby advanced cautiously and…took hold with apparent unwillingness, and then began the most brutal and savage contest that two men could engage in.

For fully five minutes they sparred with their feet in a manner that was simply wonderful. Blows were countered and returned with the same skill and rapidity as shown by men fighting with their fists. Not once in that time did either man more than touch his opponent's skin.

Then McTevish, taking a firmer hold on his opponent's collar, lifted his left foot and, after keeping it poised for a moment, made a straight toe kick for his opponent's right knee.

Grabby deftly avoided the blow by spraddling his legs far apart, and with almost inconceivable quickness brought his left foot around and caught McTevish on the outside of the right calf.

The flesh was laid open almost to the bone, and the blood spurted out in streams. 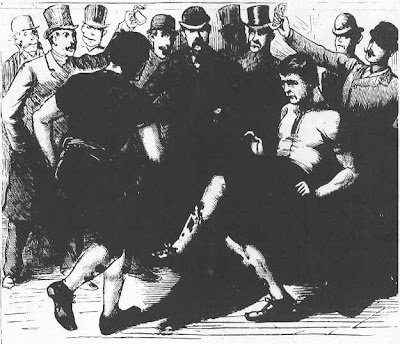 McTevish never uttered a word. At the same instant that his own leg was cut he gave Grabby what is known as the sole scrape. Beginning at the instep and ending just below the knee pan, Grabby's left shin was scraped almost clear of skin.

Both men were evidently in pain, and angry. They kicked and countered a dozen times again without doing any damage. Then Grabby, by some mishap, lost his hold… In attempting to grasp it again he lifted his eyes for a moment, and before he could recover himself the calves of both of his legs were laid open by a double-foot kick.

In return for this he succeeded in delivering a terrific kick on McTevish's knee, causing him to drop to the ground like a log, pulling the other kicker on top of him.

The seconds rushed forward and separated the men and took them to their corners to bind up their wounds. The first go or round occupied sixteen minutes.

When the call of purr came again the purrers hobbled to the centre and took another hold. They were, indeed, a pitiable looking affair. McTevish's legs, although bound up in plaster, were bleeding freely, and the exposed places looked like beefsteak.

His opponent's shins had both been scraped clean of the flesh, and the blood was oozing out from between the strips of plaster…"
©J.R. Daeschner

Like what you've read?
You can buy True Brits here.
Posted by Unknown at 13:41