A best-selling satire on Methodism in 1773 used the Cotswold Olimpicks as the setting for a confrontation between a would-be firebrand and a bemused mob.

In The Spiritual Quixote, written by local Anglican vicar Richard Graves, a Methodist squire named Geoffry Wildgoose sets out to change the world (on a wild goose chase—geddit?), accompanied by a Sancho Panza sidekick. 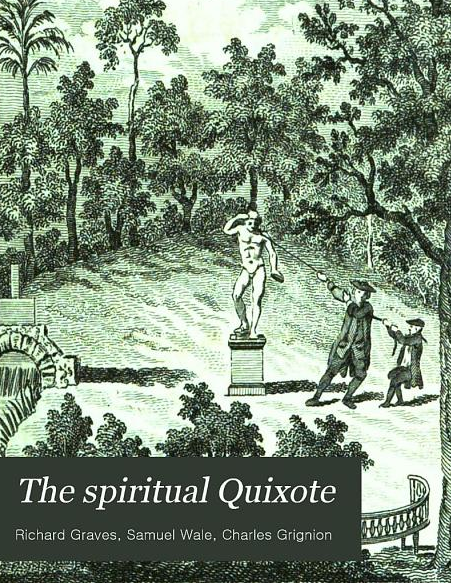 Dover's Hill is the site of "Mr. Wildgoose's first Harangue". He views the Olimpicks as "a heathenish assembly… where so many souls are devoted to destruction, by drinking, swearing, and all kinds of debauchery".

As priggish as he is quixotic, he's shocked to see young women shucking their outer garments ahead of a race and "exhibit(ing) themselves before the whole assembly in a dress hardly reconcilable to the rules of decency".

And there's no doubt the races were racy, the closest the 18th century got to a wet T-shirt contest.

In Hobbinol, Somerville worked himself into a lather describing one woman's "amiable figure": "Her heaving breast, through the thin cov'ring view'd,/Fix'd each beholder's eye..."

And the prize—a virtually see-through linen shift—didn't leave much to the imagination, either.

"They may make a poor SHIFT, like the fig-leaves of Eve, to cover the nakedness of your bodies," Wildgoose splutters, jumping up on a basket. "If you have any regard to the health of your souls, shun, as you would the plague, these anti-Christian recreations..."

At first, the crowd mistakes the Methodist for a quack doctor; all they can hear are words like "health" and "plague".

But then they catch what he's really saying: "Instead of bruising the head of that old serpent, the Devil; you are breaking one another's heads with cudgels and quarter-staffs; instead of wrestling against flesh and blood, you are wrestling with one another."

Realising all this God talk might be bad for business, a pub owner starts heckling the Methodist, inciting the crowd to pelt him with dirt, dung and orange peels until they drive him Dover's Hill.