Part 8: Shakespeare and the English Olimpicks

To win royal backing for his May games, Dover could count on two powerful allies who just happened to have country homes in the area.

The new lord of Campden, Sir Baptist Hicks, was one of the richest Britons ever—a multibillionaire by today's standards—who made his fortune selling fine cloth to James I and then lending him the money to buy it (plus interest).

Dover's other courtly connection was Endymion Porter, a kinsman and native of the area who was a trusted adviser to both the king and his son.

After James died in 1625, Porter persuaded Charles I to donate some of his father's cast-offs—a plumed hat and ruff—to Dover.

Despite James' notoriously questionable hygiene, the showman wore them with pride at the games.

In fact, the only known portrait of Dover shows him as Master of Ceremonies, kitted out in the dead king's hand-me-downs (possibly cut from cloth supplied by Sir Baptist). 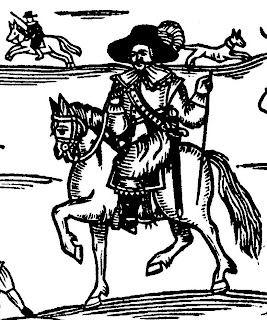 Mounted on a white steed, he would ride through the crowd bestowing yellow silk ribbons on men and women; some gallants supposedly wore the yellow favours all year-round.

Dover broadened the games' appeal by combining newly fashionable sports like horseracing with plebeian pastimes: throwing the hammer, spurning the bar and, of course, shin kicking.

Food and drink abounded alongside scandalous pleasures like mixed-sex dancing, while the centrepiece of the celebrations was a wooden castle, complete with a flag and real cannons (supposedly donated by King Charles) that were fired at the start of each event, echoing a similar tradition in London's theatres.

With their royal cachet, the games quickly became the biggest spectacle of their kind at the time.
Jaded trendsetters from London travelled to see them as an alternative to Bath and the Spring Gardens in Hyde Park.

Suddenly, England's country games were no longer rusticke; Dover had made them Olimpick, in keeping with the Renaissance vogue for antiquity.

And just in case anyone missed the connection, he had a musician dress up like Homer and walk around plucking a harp (the Iliad contains the earliest reference to the Olympian Games).

The first poet to dub England's Games "Olimpick" was Michael Drayton, a contemporary of Shakespeare's who helped compile a flowery tribute to Dover called Annalia Dubrensia.

Published in 1636, the book's frontispiece shows Dover as a stout middle-aged gent and also provides one of the earliest illustrations of shin kicking: two men in breeches grip each other's arms and hack at each other's tibias.

Although most of the 33 contributors were Dover's friends and relatives, the project did attract some well-known writers, including Ben Jonson.

Unfortunately, Shakespeare died long before he could be pressed into singing Dover's praises. But that hasn't stopped Campden's boosters from searching for the Holy Grail of the heritage industry: any link between the Bard and their town.

Some point to a remark in The Merry Wives of Windsor as a reference to the Cotswold Olimpicks ("How does your fallow greyhound, sir? I heard he was outrun on Cotsall").

But that's probably much ado about nothing: greyhound racing was common in the Cotswolds.

Still, Shakespeare probably would have known about the games simply because they were too big to be missed; what's more, Stratford is only 10 miles from Campden, and the Bard retired to his hometown the same year that Dover started his Olimpicks.

The two men had friends and relatives in common—and compatible personalities—but whether Bill ever met Bob is anybody's guess.
Posted by Unknown at 13:35